The proliferation of smart devices has placed considerable pressure on the data capacity of the cellular network. WiFi has emerged as the de-facto technology for selectively augmenting capacity for the short term. Critically, though, while WiFi generally tends to a positive for the user experience, user performance on WiFi is not always an improvement. In particular, automated roaming to WiFi has a strong potential to reflect poorly on the network carrier, institution, or place of business. Roaming and dead spots in WiFi coverage coupled with the “hard” handoff necessary to roam back to cellular further compound challenges.

The primary challenge is how to effectively gauge the capacity and quality of the wireless link for a given mobile device at a given location. Traditional techniques for speed testing tend to be exceptionally heavyweight (ex. SpeedTest.net) moving potentially tens of megabits of traffic and taking on the order of seconds to complete. Lighter weight variants fare better with regards to cost but tend to suffer under packet aggregation optimizations introduced in more recent WiFi and cellular variants. For decisions such as roaming or more importantly, upstream decisions with regards to data routing, such information may only be of limited value by the time it is finally resolved. The focus of this work is to radically overhaul in-band characterization of network performance by delivering reasonable network characterization requiring two magnitudes less of data (< 100 KB) and doing so on the order of less than a quarter of a second (< 250 ms).

The FMNC project started in 2015 and is sponsored by InterDigital and Nokia via the BWAC I/UCRC, an NSF program. Aaron Striegel is the PI for this project. 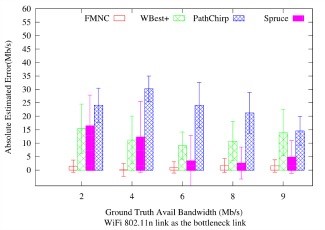