To address problems in this space, our team has been developing a low-profile computation and communications platform for drones and collaborating with drone control and software engineering researchers to conduct preliminary flight tests and data collections. The platform consists of a Raspberry Pi embedded computer with a built-in WiFi device as well as a USB UMTS / LTE device that can easily be mounted on a drone. Positioning is obtained for now via a GPS board, or “hat,” for the Raspberry Pi, but it can instead be obtained from the drone itself. Software is being developed to allow the onboard computer to act as a communications manager for the wireless interfaces, allowing the drone to monitor the performance of each wireless interface and controlling the types and frequencies of messages broadcast on each. To prototype these services, we are implementing a distributed detect-and-avoid protocol called Position Intent Broadcast System (PIBS) in collaboration with industry partner InterDigital.

Finding: There is a growing demand for drone swarms, given that they have a wide variety of applications, including search and rescue, surveillance, military operations, and scientific data collection. This increased interest in drone swarms has pushed technical challenges such as collision avoidance and drone communications over wireless links to the forefront of drone-related research. Currently, the platform for drone communication is to have drones receive commands from and send their data to a ground control station, thus requiring one unique telemetry dongle per one drone. Therefore, the number of drones is limited by the number of server USB ports.

However, this project seeks to change the way drones communicate by having them communicate with each other, thereby making drone swarm communications more efficient. We focused on implementing a distributed detect-and-avoid protocol called Position Intent Broadcast System, or PIBS, that was created in collaboration with Interdigital. To do this, we had to work on getting PIBS, which is run on a Raspberry Pi, to pull GPS directly from a SITL (Software in the Loop) drone. 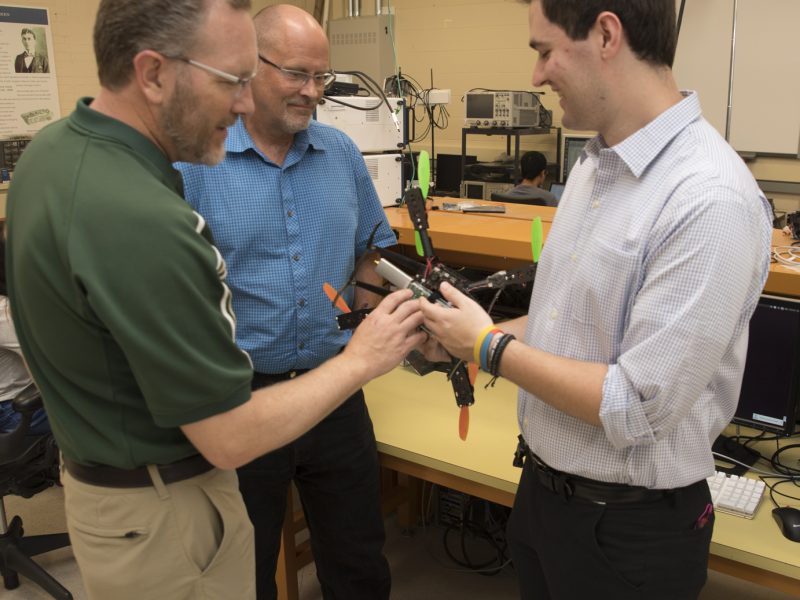