Project Description: The Citizens Broadband Radio Service (CBRS), currently targeting a radio frequency (RF) band centered around 3.5 GHz, represents a breakthrough in wireless technology and policy in the United States. For the first time, widespread commercial cellular networks based upon LTE technology will intelligently utilize RF spectrum that has otherwise been exclusively reserved for government systems like Navy radars. As RF spectrum becomes more crowded, and sharing spectrum among very different commercial and government systems becomes the norm, wireless system engineers need to build radios and network services that are much more context-aware and collaborative compared to current designs, basically redesigning such systems from the ground up to be more resilient to interference in congested environments.

To address problems in this space, our team has been developing prototypes, models, and algorithms for what is being called a collaborative intelligent radio system (CIRS). A CIRS needs to be able to sense what is going on in the RF spectrum in and around its intended band of operation, and then adaptive its transmission formats and receiver signal processing algorithms accordingly. Our radio prototypes are based upon software-defined radio (SDR), with which our team has extensive experience. Student projects involve learning how to use and develop for the prototyping platform, designing and implementing a set of new features, and testing and demonstrating those features to the group.

Finding: Current pedagogical techniques of understanding communication systems and hands-on implementations of radio systems are on the decline as more teaching institutions begin to hide key elements of communication systems. One such key element would be the physical radio path which up-converts and down-converts a radio signal. The importance of student’s comprehension of these key elements will give them the insight to diagnose and find solutions to problems that lay at the core of communications systems.

The goal of this project is to devise curriculum and a laboratory setup that is low-cost and packaged to be accessible to academic and government institutions. The research this summer is determining and testing the laboratory setup and materials for the course which consists of a radio path and an ADALM 2000, which is a device that is able to send and receive signals among other features.

This project task is to utilize On-Off Keying (OOK) modulation to modulate a signal and send it out through an ADALM 2000, then receive a signal through the ADALM 2000, and demodulate it in order to get the original signal that was sent out. This will allow the students to see their signal being sent out and received which will improve the student’s understanding of how radio systems work. This combined with the theory and laboratories of the course will improve the student’s comprehension of an overall communication system. 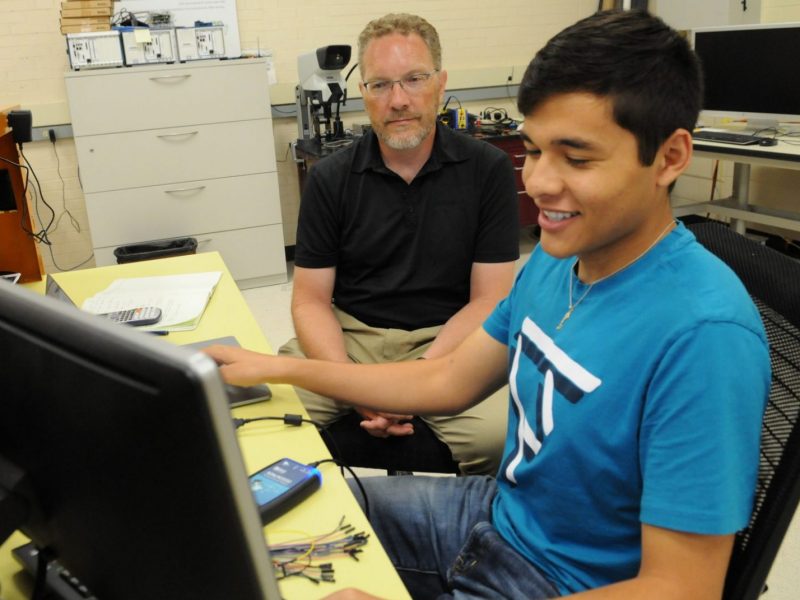