Project Description: This project investigated reconfigurable microwave circuits based on photo-induced electromagnetic band gap (EBG) structures. EBG structures allow the circuit to interact with electromagnetic waves and create stop-bands, pass-bands, and band gaps for wave propagation. EBG structures can be employed for antenna and filter designs and have been researched extensively in the field of wireless communication. The ability to dynamically reconfigure the EBG patterns allows the circuit to be tunable and reconfigurable, and therefore the circuit frequency response can be altered. In this project, the EBG patterns required for reconfigurability can be generated using a novel optical control approach that avoids any complicated fabrication processes. In brief, the approach takes advantage of photo-induced free carriers in a semiconductor, and the EBG patterns can be directly projected onto a Si or Ge wafer to serve as a microstrip transmission line ground plane. By projecting different photo-patterns onto the semiconductor, tunable EBG band-stop filter (BSF) frequency response can be realized. For a prototype demonstration, a tunable/reconfigurable microwave BSF for X band has been designed, simulated, and studied. Both the BSF center frequency and stopband bandwidth can be dynamically tuned.

Finding: The research explored in this project involves the simulation of components utilizing EBG structures using HFSS (High-Frequency Electromagnetic Field Simulation Software); simulations with the optically illuminated EBG on Ge substrates were also investigated. Prototype circuits have been fabricated and assembled for measurements. The knowledge obtained from these simulations along with additional research was used to aid in the development of a new prototype reconfigurable and tunable EBG component. HFSS simulations performed by the student have shown that important characteristics of the BSF, such as the stop-band bandwidth and the center frequency, can be tuned by changing the EBG patterns illuminated on the Ge ground plane. 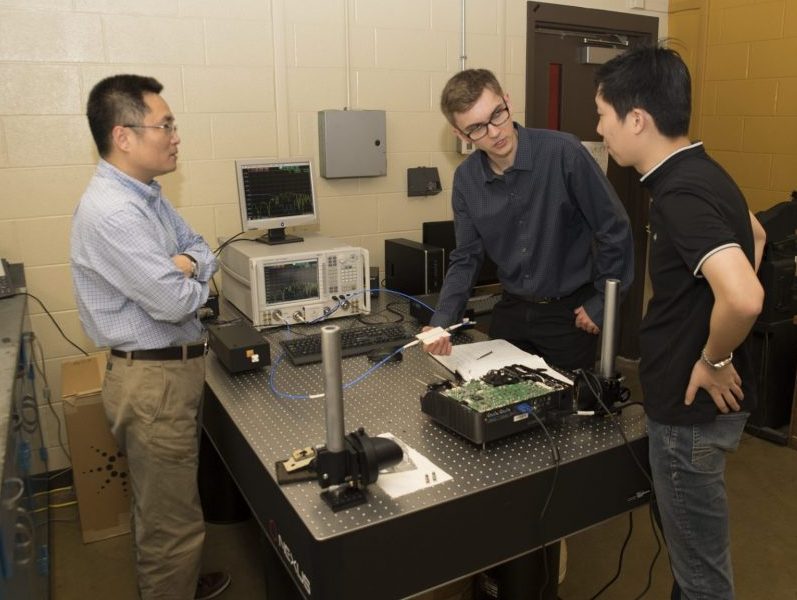